Well, we missed the Auto show a few weeks back which was fairly dissapointing but if there is one thing in this world that i’ll get outta bed for other than an imported supercar, its food! So naturally when we were made aware of the 2009 Gwangju International Food Show we decided to check it out! 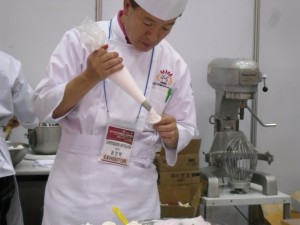 The event was at the Kimdaejung Convention center last Saturday and featured a pretty wide variety of foods from Kimchi to Cakes. We even had the opportunity to sample some wood juice….yup, tasted just like you would imagine….like wood. We also tried some interesting squishy garlic that was interesting and supposedly good for you.

Here”s our famous Korean floozy soju ad girl…i just had to take a shot with her….

….i take that back…i’m sure her personality is sparkling.

We also spotted our local coffe shop girl who was in some barista contest….she was visibly embarrased when we freaked out and started waving…but nonetheless, she had meeguk fans 😉

We took a minute to check out the Kim Dae-jung memorial on the way out which was kinda neat. For those who are not familiar, Kim Dae-jung was was president in South Korea from 98-2003 and the recipient of the Nobel Peace Prize in 2000 for his unification efforts with North Korea. It was neat to see all the images his life and the amazing story behind the man. I’ll ket wiki enlighten you if you are interested to learn more…http://en.wikipedia.org/wiki/Kim_Dae-jung