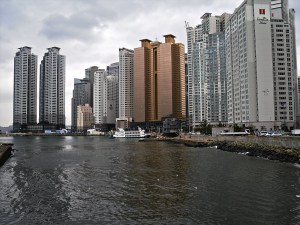 A few weeks ago we went to Busan and stayed in Haeundae Beach. Haeundae Beach may be the most famous beach in all of Korea. Of course we went during the winter so it wasn’t packed with Koreans in heels enjoying the sunshine from underneath their sweatshirts (see some earlier posts on the beach).

Haeundae was named by the poet Choi Chi-Won, it means Sea and Clouds. He has a stone somewhere on the Beach with his Calligraphy written on it.

There is an aquarium for all the tourists. All my students highly recommend it, but most adults I know have said that they have enjoyed other ones more.

We then took a walk along the front of the beach and saw this great sign, which Adam definitely approved of.

Then, infront of the waterfront Westin hotel there were three or four Ajummas in the water facing the freezing cold water and wind exercising with their gloves on and masks to shield themselves from the very little sun.

You can also take a stroll along the Sea on a very long boardwalk that circles the beach and Dongbaek Island which was once an island but with the buildup of sand and such it is now connected to the main land. Along the way is a beautiful mermaid sculpture. She represents the legendary heart breaking love story of the Princess of Topaz from the Naranda country beyond the Sea. In this country lived a mermaid who was married to the King of Mungungnara. She shed many tears longing for her homeland and reflecting on the topaz beads given to her by her grandmother-in-law which she holds in her hands. 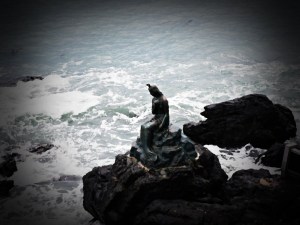 As you stroll through the city of Haeundae you can see just how developed and wealthy the area is. You don’t see many of the apartment highrises like you do here in Gwangju, but more condo towers and hotels. There is even a Trump Tower built. We are not sure if it is a legit one, but it sure did look like it. 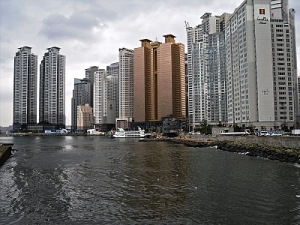 (I edited the pictures playing around with the new photoscape)