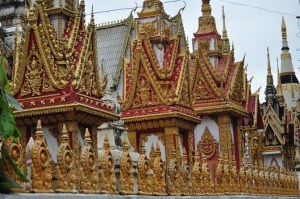 After an 8 hour bus ride on a double decker bus reeking of urine, we made it to Laos. We paid a little extra of course, for our visas to be processed and have entered the only land locked country in SE Asia, along with the most bombed country. From what we heard, Laos is relaxed…way relaxed. People spend the day filling up on Opium and BeerLao. Although we don’t intend to partake on the former.
We arrived in the dark by bus and hired their version of a tuk tuk to bring us to a hotel we heard was real nice, with internet and all…for $20. When we got there, the driver of course, took more money than he should have from us, drove off and the hotel, of course was sold out of the inexpensive rooms. They offered to make a deal and give us a room for $35, but that extra $15 is two meals here..so we declined. We ended up finding a hotel down the street with a nice garden and decided to stay…once again, what we originally heard as 70,000 kip turned into 170,000 kip and then they rounded up on the conversions. So, after spending 5 minutes showing them how we don’t round up and we do everything fairly…we paid for our room and went to have some dinner. We were both tired from the travels and really upset about the money issues.
The thing is this, the Lonely Planet books which really seem to be everyone’s bible here, write up hotels and restaurants and most people use them. Those hotels and restaurants are always packed. But, the hotels and restaurants really don’t do much to keep up their reputation nor do they seem proud of it. I don’t think they realize that if they didn’t appear in their book , at least 50% of their business would drop.
Anyway, we ate…went back to our room and was greeted by yet another ROACH. Adam tried to kill it before I saw, but the truth is, as long as he isn’t laying a nest on my chest and as long as I don’t see an army of them having a meeting, I will become more accepting of the Roach.
Today we are off to explore the town, I don’t believe we will take a motorbike out for the day, I think we will reserve our funds until we get to a place where we can go explore more, hike more, see more of the towns. 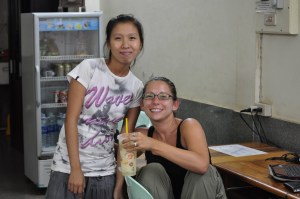 We spent the next day at the Internet Café called Lankham Internet café right next door to the Jasmine Indian restaurant which we ate at twice! Then, we strolled a bit around the city for the great hour that it wasn’t pouring. We found a huge Buddhist School/ temple and a nice quiet city. Tonight, I think our plan is to take the night bus, which we haven’t done before, to Vientiane  (16 hours away)