There was a time in my life where the thought of making a day trip to Costco would have been met with a laugh and a face smack. But, those days are gone….long gone…so gone in fact that Nicole and I actually left a beach party early just so we knew we would have enough time to slowly peruse each and every aisle of the wholesale shopping uberstore. 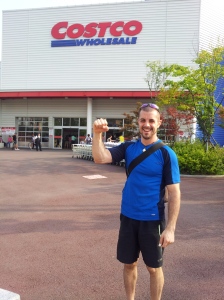 Located not far from centum city but in a very odd backstreet part of town, the Costco logo drew nearer to us on our cabby’s gps and so did our excitement…no really, its not fluff, we were amped. Look, i’m legit amped here. 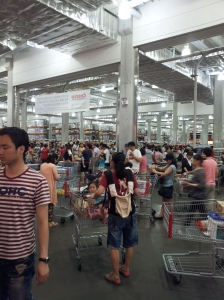 Somewhat intimidated by the masses with their oversized carts, we braved the elements and pushed our way to the membership counter and made it official. For 35K won we got ourselves a global pass for a year. Thats important as their are almost 200 Costco’s located outside the US, and 7 of them happen to be in South Korea.

Any seasoned Costco member know that before shopping for bulk items you should probably eat first or you will come home with an absurd amount of olives and blueberry muffins. To avoid this hanus fate we hit the food court which to our delight was equipped with the same menu items we came to expect from our home based locations. Hot dogs, churros, pizza, burgers and calzones. We opted for the dog set (hot dog) and calzone for 6K. Bueno.

What is nice as a foreigner is that the Costco’s feature a ton of english signage and are super easy to navigate which is nice at times and takes the guesswork out which can be a rare occurrence living abroad.

We took a left to right approach and casually made our way throughout the store, picking up a few things but keeping it controlled as best we could. Mass quantities of reese’s pieces is hard to say no too for any reason but we managed. What was nice on a personal note was when we saw the “Apple and Eve” display which is actually the company that my dad works for. Natasha (my Dad’s wife) had actually put together the labels a few weeks prior so it was great o see her work on display so far from their home in NY.

We scooped up a massive reusable bag for 1K won and checked out to wrap up our experience at Costco. Salsa, meat, chicken, bread, pita, sour cream, juice, a pineapple and a few other items rounded out our successful night out at Costco. Don’t laugh, it’ll happen to you too one day.

i live in bulk,