camping in the backyard 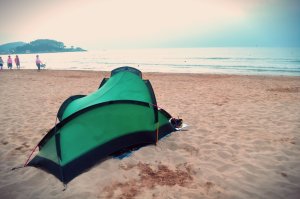 well…almost the backyard. Deciding that a weekend getaway to an island was not practical, we opted for a closer approach for our first camping outing of the season. Songjeoung Beach (송정해수욕장), we had been told was a good spot only about 30 minutes by subway and a “short hike” away.

For the past few weeks we had slowly been gathering supplies in prep for the day so with our bags packed, food ready and Eunee in her travel house, we ventured out…. 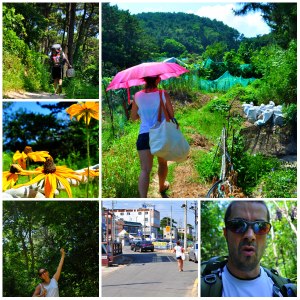 The brisk subway dropped us at the end of the Jangsan line (green line) at which point we began the hike to the beach. The directions we were following we from a post online and so minor details had been left out (deliberately or not…i’m not sure). Regardless, our hike led us through some residential spots and to the start of a footpath that would bob and weave through the shoreline until it supposedly dumped us out on the beach were we would find  nice empty space to set up camp. Well, nearly an hour later, 12 pounds lighter and quite a bit ranker smelling than a family of elephants would care to hang with….we doubted the legitimacy of our source. Alas, after making a minor misstep, we managed to find our way to the beach which minus the four hundred thousand other people was quite nice and a welcome site.  Puppy Parenting Lesson: Do not hike your lil doggy in a travel crate unless you know they are not prone to motion sickness…..Eunee we found out, was indeed…sick of the motion…eww.

Not sure where we would camp but not really caring, we immediately found a place to drop our gear and get in the water with the rest of the country. 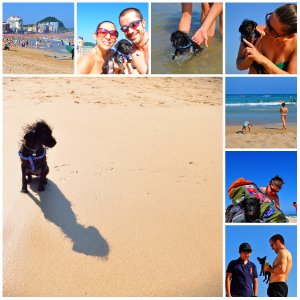 As fate would have it, our spot was right near a few couples that included a couple guys from South Africa and their Korean wives who spoke perfect english Their kids, instantly fell in love with Eunee and kept her busy for a few hours while we chatted it up with the super friendly bunch. Certainly one of the perks in doing unplanned things in life are the unexpected people you meet along the way. It was great talking with them about travel, life, new places and being away from the “grind” that we all had common experiences with.

Once night began to fall we said farewell to our new friends. After smoothing it over with the local authorities (the lifeguard). We camped right where we were and fired up the grill for some much needed grub and vino. Different than Haeundae and Gwangalli, at Songjeoung you are free to pitch a tent anythere once the lifeguards leave which is roughly 6:30pm. To be polite you can ask like we did just incase you feel like you might be making a foreigner faux pas.

There was a concert happening no more than 200 yards away so between that and the roman candle fiesta occurring in every direction, the peaceful sounds of the ocean water we not quite as prevalent, but nonetheless we enjoyed our dinner and the sounds of the Korean shore life.

As things began to die down we started to settle in but not before one last hurrah in the form of a 4th of July like fireworks show that was literally right in front of our tent. About 10 minutes of dazzling lights and Eunee flipping $hit, it was finally done. 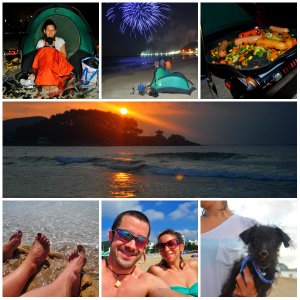 The next morning I woke at about 5:30am to a fairly amazing sunrise and a beach that recalled some of the same imagery as my college apartment after an all night rager. We did our breakfast and packed up our site in time for the beach squad to erect about 3 thousand umbrellas for the masses that would soon arrive. By 7:30am we were ready for the water again which is how we rounded out the trip for the next few hours. If you are interested in following the same route we took, here’s a rundown of the directions below. Have fun and Good Luck!

Busan Subway (Green Line 2) to Jansan Station, exit #1, Turn Right and go up the hill, Veer left and go up the bigger road and straight through the intersection at the school, keep walking through the apartment buildings, continue straight until you find some wooden stairs on the left hand side of the road. Follow this for 4k, When you get to a place where you need o decent down rock, go down and when you hit the train tracks, turn left and find a tunnel that goes under the tracks and follow that road down until you see the beach. Its a fun hike, really 😉